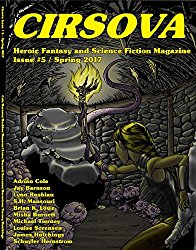 Issue 5 of Cirsova is mostly devoted to stories set in “Eldritch Earth”, a setting written by Misha Burnett in “A Hill of Stars”, which was in the first issue of Cirsova.  It appears that many authors were as interested in the setting as I was, since they decided to write stories taking place there.

I enjoyed almost every story in this issue, and didn’t think any of them were poorly-written.  Most of them gave me a “sword-and-sorcery” vibe, even if the “sorcery” was sometimes poorly-understood technology.

I meant to write this review earlier, but I lost my notes, probably as I ran out of a hotel room to make it to a job interview on time.  It’s a testament to these authors that I was able to glance at each of their stories for a couple of seconds and remember their plots and characters.  It is possible I’ve cross-wired a couple of the stories, though, so let me know if you’ve read this issue and spot anything wrong in my writeup below.

War of the Ruby by Brian Lowe.  This story reminded me of Fritz Leiber’s Fafrd and Gray Mouser, although I haven’t read any of those stories in decades, so I could be off.  One memorable setting detail was the presence of monster-sized flatworms which scoured the city’s streets, feeding on the horse poop and roadkill and such that would normally make a medieval city such a disgusting place to live.

Darla of Deodanth by Louise Sorensen.  This was another enjoyable sword and sorcery tale.  If I remember correctly, the main character and her tracking dog were hired to save someone else’s pet dog which was stolen and taken into the caverns under the city, to be eaten or sacrificed or such.

In the Gloaming O My Darling by Misha Burnett.  Two men are chained on the beach as sacrifices to siren-like creatures.  The story does a great job of exploring the characters without slowing to a crawl or losing the fearful tension.

The Queen of Shadows by Jay Barnson.  A man returns home to rescue his sister, but it turns out that she’s on a mission of her own.

The First American by Schuyler Hernstrom.  A hero tries to rescue the abducted people from his village, with the help of a time-traveling astronaut.

Through the Star-Thorn Maze by Lynn Rushlau.  Two people attempt an escape from a dystopian society.  I seem to remember this being one of the non-Eldritch Earth stories in the magazine, although it certainly would have fit in there.

The Bears of 1812 by Michael Tierney.  This is definitely not an Eldritch Earth story, as Sacagawea is summoned to the White House during the war of 1812 in order to break an indian curse.

A Killing in Karkesh by Adrian Cole.  Those darn cultists are up to no good again…  This is another non-Eldritch Earth story, but stylistically it fits in just fine with the EE stories.  It is a sequel (or at least related to) the author’s story in Cirsova #2.

Beyond the Great Divide by SH Mansouri.  This story is told from the POV of a member of a hive-like species.  Nothing wrong with it, but non-human POVs generally don’t work for me.  If you’re reading the magazine on a kindle, make sure you don’t skip this story.  My kindle tended to jump past it, as if it wasn’t linked into the TOC.  It’s possible I was reading an early, unfinished version for kickstarter backers, however.

I’d like to see more collections of short stories set in shared worlds, but I’ve seen how hard it can be to bring together a collection of good work, even if there are no restrictions on content.  If you know of any other good examples, let me know.

← Outside the Lines: The Recruit
Good News, Everyone! →
Join 5,220 other subscribers
Follow Planetary Defense Command on WordPress.com