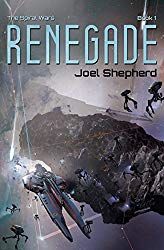 Book 1 of the Spiral Wars Series

Joel Shepherd’s Spiral Wars series fits neatly in a sci-fi style I’d love to read more of:  a galaxy full of conflicts between humans, aliens, and AIs, revealed to the reader through the action-adventures of a hero or group of heroes.  I’m not getting what I want from traditional publishers.  I can’t recall any traditionally-published American author writing anything like this in recent years (maybe decades?), and while several British authors write this type of story, I haven’t enjoyed their work.  I need to think some more about it and eventually write up a blog post, but my first reaction is that the writing of Reynolds, Asher, and Banks hit me with too much nihilism and/or aggressive atheism.  I’m still planning to give Peter Hamilton a shot.

I’ve had a bit more luck on the indie side.  If I remember correctly, Shepherd is an indie author from Australia.  I’ve also enjoyed the Galaxy’s Edge series and a few other indie works, but many of them are more purely military sci-fi, and don’t give me the aliens/AI angle or vast galaxy I’m looking for.  Reading suggestions are always welcome, so please leave me a comment below if you have any.

Below, I’ll run through the six books (currently, more are planned) in the Spiral Wars series.  As usual, my memory isn’t perfect, so I may slip details from one book into another.

The first book, Renegade, leads off with quite a bit of excitement.  The Triumvirate War (named because it was three races against three races) has just ended, and the main characters have come to the homeworld system as part of the victory celebration.  For unknown sinister reasons, the captain of their ship (the navy’s most respected hero) is assassinated, and the third in command (who becomes the series’ main character) is framed for it (the second in command wimps out and goes along with the sinister conspiracy).  Our hero escapes, first from prison, and then from the star system aboard his ship, the fleet’s newest model with a bunch of whiz-bang alien tech.

There were a few minor areas where I thought the book could’ve been better.  There was one particularly long infodump with the history of the war, and while I’m generally tolerant of infodumping, I thought this particular one was unnecessary, as the author otherwise does a good job of introducing alien races (and factions of races) in a steady enough manner that they are all clearly differentiated in the reader’s mind.  There was also some playing to currently-fashionable tropes, such as having the badass marine commander be a ninety-pound woman.  These issues didn’t keep me from enjoying the story, however, and I eagerly awaited the sequel. 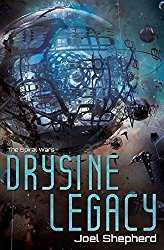 I won’t say as much about the plot of the second book, Drysine Legacy.  It brought out more details about some of the alien races, and especially about the artificial intelligences.  AIs once ruled the galaxy, but were overthrown by biological species.  Now, all alien races, whatever their disagreements, cooperate to hunt down any remaining AIs and destroy them wherever they are found.  One race even has something like a crusading order devoted to this pursuit.  I enjoyed this sequel even more than the introductory book.

I didn’t enjoy the third book, Kantovan Vault, as much, but I won’t say it’s a bad book.  It’s primarily a heist story, and I just don’t like heist stories, even if the heist is from a heavily-guarded vault on a Venusian-style planet with crushing pressures, ship-melting temperatures, and an acidic atmosphere.  I also thought the ending needed to be more conclusive, as the the heist was instigated by a kidnapping, and the book ended with the kidnapped crew member still being held captive.

The next two books, Defiance and Croma Venture, left me wondering whether I should continue with the series.  A number of interesting conflicts and mysteries had been thrown out there during the previous books, such as a human conflict between spacers and planet-dwellers, and the subtle hints that an alien species allied with the humans might actually be a genetically-engineered front for a group of AIs.  Instead of resolving, or at least expanding on, these topics, the books introduced more alien races and more conflicts.  I began to imagine the series as an infinitely-expanding cone.  One of the books also had a number of dialogue chapters where the characters seemed to be discussing nothing of any importance, and I felt like I was reading filler.

The latest book in the series, Rando Splicer, really brought the series back on track for me.  It had a number of action sequences, cleaning up some immediate problems for the ship crew so they could get back to business, and pointed them squarely at the conflicts I mentioned above.  I’m looking forward to the next novel, and Shepherd has been reliably releasing a book in this series every year.

Shepherd also has two other series.  Crossover sounds like another type of sci-fi that I’d enjoy, but I’ve been reluctant to start it because I read a review claiming the book is a bit heavy on sexual content.  Sasha is fantasy rather than sci-fi, and I’m not as big of a fantasy reader, so I wouldn’t try it out until I’d finished all of the author’s sci-fi offerings.