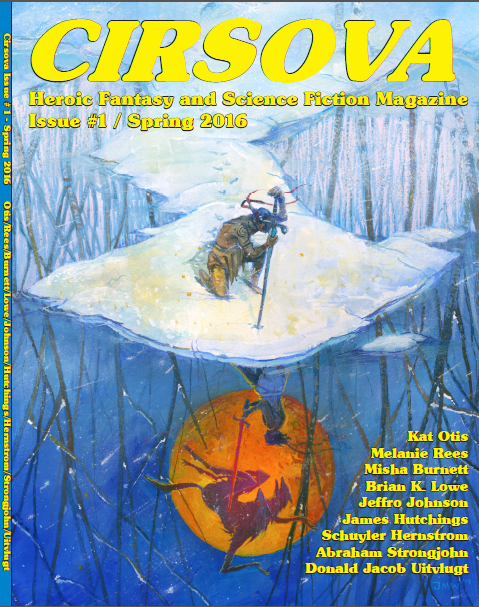 My magazine quest has gotten expensive, so I’m driving an 18-wheeler to make some money. I speak into my voice recorder.  “Trucker’s log. Date: 6-6, midnight. Weather conditions: clear, but no moonlight. Cargo: timber products. Many rigs headed same direction.”

The chimpanzee in the passenger’s seat raises one hand towards me, repeatedly flashing three letters in sign language. He must have seen the billboard. I don’t understand sign, but I’ve learned those three letters:  K-F-C.

“We had Kentucky Fried Chicken for lunch, Bobo. Let’s have something else for dinner.”

Bobo jumps up and down in his seat, shrieking out a primordial jungle call.

“Put your seat belt back on, Bobo!”

A pair of gorilla arms reach forward from the sleeping area, signing furiously.

A pair of orangutan arms reach forward, taking a pencil and pad of paper from the dashboard. A few seconds later, they pass back a written note.

I flip on an additional light and read the note out loud. “Herman needs to defecate. It is in your best interest to stop the truck. You can trust me in this matter. Fu Manchu.”

I drop the note and steer the truck onto an off-ramp. “You don’t have to sign your name on every note, Fu.  I know who’s writing them.”

Fu puts his lips together and blows a flatulent noise at me.

… and that’s the story of how The Four Apes ended up in a small desert town with a corrupt sheriff, a gang of narco-traffickers looking to buy fissionable material for a nuclear weapon, and a tribe of American-Indians mutated by atomic bomb testing. The rest is history.

The Gift of the Ob-Men by Schuyler Hernstrom. An outcast wanders across a post-apocalyptic landscape. Mushroom men give him a third eye, which keeps him alive by letting him see into the past and future. Portions of the story remind me of Logan’s Run.

This Day, at Tilbury by Kat Otis. The Spanish Armada sails up the Thames, courtesy of priests who can call lighting down on opposing vessels. The English respond with fire-starting wizards.

At the Feet of Neptune’s Queen by Abraham Strongjohn. The King of Mars fights his way through a Neptunian labyrinth. This is a retro-style story, looking back to the days when we thought the other planets in our solar system might have habitable environments and alien races.

Rose by Any Other Name by Brian Lowe. A Doctor Who-inspired story, with time travel and an intelligent gorilla. There is a bit of a surprise at the end.

Late Bloom by Melanie Rees. A steampunk airship story, with an abused-woman main character who decides to fight back.

The Hour of the Rat by Donald Uitvlugt. A servant girl in Tokugawa-era Japan tries to retrieve her stolen property. This was my favorite short story in the magazine, although it was furthest from Cirsova’s heroic-warrior theme.

A Hill of Stars by Misha Burnett. I’ve interviewed Misha, and reviewed several of his books: Catskinner’s Book, Cannibal Hearts, and The Worms of Heaven. I think he hit a home run with this HP Lovecraft-inspired story. It begins with the hero as the servant of a seemingly-immortal Old One which wills/allows itself to die. I particularly enjoyed the settings: the Old One city with features of the wrong size and in the wrong places for humans, the wide-open grasslands, and the freshwater ocean. Nothing says ancient like “freshwater ocean”. The hero encounters other humans, dinosaurs, and something the Old Ones left behind.

The day after reading this story, questions started popping up in my mind. Why were there humans in such an ancient setting? Did the Old Ones take them back in time? Are modern humans actually an ancient species who survived the age of the dinosaurs in a small enclave? Wait, did the story even say it was set on Earth?  Did it even say the characters were humans?  Misha’s writing kept me so immersed in the story that none of these thoughts crept into my mind while I read.

This is the kind of writing that keeps me reading sci-fi/fantasy — it first pulls you into the story and holds your attention, then sparks your imagination and gives you ideas for stories of your own. Misha might be out of the novel-writing business, but now that I’ve read this novelette, I really hope he’ll write more short fiction.

Influences for today’s intro story include BJ and the Bear, Every Which Way But Loose, the lyrics to the song “Convoy”, Planet of the Apes, and the arcade game Eighteen Wheeler. “Shut up, Fu” is an echo of the A-Team intro story to my interview of Cirsova’s founder/editor.

I’ve given Cirsova a higher average score than many of the others in my magazine quest, but I’m not ending the quest just yet. I’ll certainly buy Cirsova’s second issue (and review it here), but Cirsova has a specific focus, and for the winner of the quest, I’m looking for a more general sci-fi magazine.

If you’ve read this first issue of Cirsova, leave a comment below and let me know what you thought of it.