Outside the Lines: The Recruit 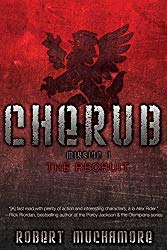 I occasionally do something I call “Reading Outside the Lines”, where I pick a book that’s not sci-fi or fantasy to see what the writing is like in other genres of fiction.  I’ve taken on thrillers already, so today I thought I’d tackle young adult.  I’ve reviewed a couple of young adult books with major fantasy elements:  Steelheart and Children of the Different, but I thought to get the full experience, I’d need to try a young adult book set in the real world.

The Recruit is the first book in the CHERUB series, which is about a secret British intelligence agency that uses young orphans as agents.  Child agents can do things like become friends with the bad guys’ kids to snoop around their homes, etc..  There is a mini-mission about halfway through the novel where a gang of the agents break into an arms dealer’s house and vandalize the heck out of the place.  His security footage shows that the intruders were children, and his place is trashed, so he doesn’t suspect that his papers were photographed for MI5.

I put off reading this book (listening to the audiobook, actually) for quite a while after I purchased it, afraid that the young adult aspects would make me roll my eyes until I became dizzy and crashed my car.  That didn’t happen, though.  I didn’t get any sense that the writing was “dumbed down” for a younger audience.  In fact, I think it was as good or better than much of what I’ve read targeting adults.

I found the romantic portions of the book realistic rather than sappy, and they were brief, underscoring the young nature of the main character.  He’s eleven or twelve years old, so it’s natural he’d have a crush on his fifteen or sixteen year old female swimming instructor.  He kisses his first girlfriend while on his first mission, and his handler has to get him back to hanging out with suspects instead of sneaking away to be with the girl.

Although the author’s writing style kept me engaged, I felt that the book should have focused more on the main character’s actual mission (protecting an oil-industry conference against a terrorist attack).  I’m just guessing, but feel that the mission takes up a third or less of the book.  The majority of the book seemed to be his training, and there were also chapters of his pre-orphan life dealing with school bullies and such.

I also wonder if such an agency would even want to train its agents to such a degree.  If you train children in armed and unarmed combat, teach them to read Cyrillic or Japanese kanji, and send them through a jungle survival course in Malaysia, are they still going to interact with adults the same way normal children do?  Maybe adults don’t pay that much attention to kids, but it seems to me that this training introduces more risk than reward, and child agents don’t stop aging during training, so a government agency might just throw the kids out there relatively untrained and see what happened.

Let me know if you’ve read this book, know of any other YA books that are good enough for adults, or have any thoughts on YA fiction in general.