Security Contractors vs Mutants and Aliens

This is my third post in a row about books I won’t be nominating for the Planetary Awards.  (The clock is ticking — you still have a few days to get your own nominations in.)  This time I’m covering two books in one post, because they’re both about security contractors up against sci-fi monsters. 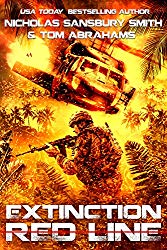 Extinction Red Line had more filler than plot and action.  There’s a fairly normal sci-fi opening:  a platoon of marines takes an experimental drug right before raiding a communist Vietnamese village.  They’ve been told it’s a precaution against Agent Orange, but it actually turns them into raging psychotic mutants and they kill each other.  Good enough way to start a monster story, but somewhere in the middle of the book the story flashes back to a long scene where the marine lieutenant is briefed about the drug, using the Agent Orange cover story.  Unnecessary.  Adds nothing.  Later, we get flashbacks about the lieutenant’s fiancee before he went to ‘Nam.  Another character meets a woman on a subway, thinks about calling her, calls her, and never meets her again in the entire story.  Fluff and filler, everywhere.

I also didn’t enjoy some chapters from the (once-human) “monster” POV.  Monster:  ‘Oh, I recognize that person/thing, but I no longer care because I’m a monster.  Kill, kill.’  Stories have monsters so heroes can kill them, not so monsters can have feelings.

Existential had a few fluffy moments, but they were brief in comparison.  I felt the main character’s squad mates were introduced too quickly, so they never really gelled in my mind despite having distinct physical characteristics.  If I had been reading the story instead of listening to an audiobook while driving in traffic, this might not have been an issue.  Ultimately, a couple of the characters blurred together for me, so I didn’t care when they started dying.

Some moments in the book just went over-the-top for me.  The alien monster had already engaged in some gruesome bone-breaking kills, but when a female scientist squatted to pee and the monster shanked her up the hoo-ha, I thought that was a bit much.  When a CIA bad guy shows up at the alien crash site, he just happens to be the man who killed the main character’s wife and child years earlier.  Pretty big coincidence, and unnecessary to the plot since the main character already wants to kill the CIA man to save the human race from alien invasion.

Of the two books, I preferred Existential, but it wasn’t good enough to earn my Planetary Award nomination.  If you have any suggestions for other books where soldiers or private military contractors take on aliens, mutants, or the undead, leave me a comment below.