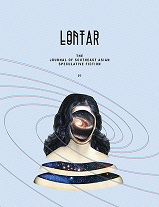 Lontar is, as far as I know, Singapore’s only SFF magazine.  Like many regional SFF magazines, it is supported by a government grant.  [Update:  the magazine has lost its government grant and is now attempting to fund its final two issues through Patreon.]

The magazine is not limited to Singaporean authors.  This issue contains stories written by an Indonesian, a Philippino, and a Chinese-American.

It was after midnight when my plane touched down in Lontar City.  I don’t remember how long it took to clear customs and catch a cab to my hotel.  To save money, I’d booked an interior hotel room (no window).  The sun doesn’t disturb me, and it’s late afternoon when I wake up.

I walk across the street to a convenience store, to get a coke for breakfast.  The store’s refrigerators have racks labeled for coke, sprite, and dozens of other beverages, but they’re all filled with identical bottles of a green tea drink.  I grab one, hoping that the foreign characters on the bottle don’t say “Soylent Green”.

There’s a long line to check out at the cashier.  Everyone but me is buying an identical T-shirt, light purple with the phrase “I ♥ Lontar” written across the chest.

I ask the guy in front of me, “What’s with all the T-shirts?”

He looks at me like I’ve asked why he doesn’t drink molten asphalt.  “For the Lontar Day parade.”

He gives me the same look.  “Lontar street.”

The man behind me in line speaks with a thick, Australian accent, “Oi, Yank, are you daft, or did you just fly in yesterday?”

“Technically, it was this morning.”

The door chimes as a government inspector enters the store.  I know he’s an inspector because he’s carrying a clipboard, and also because he has a cheap plastic badge clipped to his shirt, which reads “Inspector”.

The inspector picks the last man in line, since he’s closest to the door.  “You, show me your ID.”

The man fumbles with the cards in his wallet before removing his ID and showing it to the inspector, who records the information.

The inspector asks, “Have you read the latest issue of Lontar Magazine?”

The man nods his head, unable to speak.

The inspector holds his pen to his clipboard.  “Which story in the magazine was your favorite?”

The man wipes sweat from his forehead.  His friend, just ahead of him in line, grabs his arm.  “You remember.  We were just discussing this.  You said your favorite story was … the first story.”

The man nods his head again.

The inspector makes a check mark and turns to the second man, who already has his ID ready.  “Your favorite story?”

“My favorite was … the last story.”

The inspector records the data, and walks past myself and the Australian, who stick out as obvious foreigners.

I call out to him, “Why are you asking about story preferences?”

The inspector turns to face me, but says nothing.  I ask my question again, thinking he didn’t understand my accent, but still get no response.  I can only tell he’s conscious because he blinks occasionally.

The Australian taps me on the shoulder.  “Don’t worry, mate.  He’ll snap out of it eventually.”

“I told you about asking questions.”

I notice that everyone else in the room is focusing a hostile glare directly at me.  I tilt my head toward the Australian and speak out of the corner of my mouth.  “Why does everyone here look like they want to kill me?”

“These people spend half their lives doing exactly what the government tells them, and the other half trying to guess what the government wants them to do without being told.  They’ve never asked a question their entire lives, and you come here with questions, questions, questions.  You’ve got to lose the word ‘why’ from your vocabulary, mate.  There is no ‘why’ to anything here.  Everything just is.”

I set my beverage on a shelf and head for the door like that’s what I meant to do all along.

The Australian shakes his head.  “Never going to survive here.”

Running Shoes by Ken Liu.  A Vietnamese girl in a shoe-making sweatshop dies on the assembly line, and her spirit goes into a pair of shoes.  This was an over-the-top sob story.  I’m sure there are sweatshop workers who have miserable lives, but the writing in this case made the whole situation seem hokey rather than sad.

I’d heard the author’s name quite a bit in the past few years, mostly for translating another sci-fi author’s work from Chinese, so I decided to look into other work he’s done.  It turns out he wrote the first story ever to win the Hugo, Nebula, and World Fantasy Awards, The Paper Menagerie.  That was in 2011, a year when I didn’t read much sci-fi.

I read The Paper Menagerie after learning of it, and while I found it very touching and emotional, I don’t think it’s much of a fantasy.  One interpretation of the story would be that the child is only imagining that his origami animals move around and do things, in which case the story doesn’t have any fantasy element at all.  Another interpretation would be that the child’s mother really does put magic into the animals, but even in that case, they don’t have much impact on the events in the story.

Caronang by Eka Kurniawan.  A family captures a baby Lupus erectus (a dog that is more intelligent, walks on two legs, and has front paws that can manipulate objects) and raises it as a pet.  The dog gets into an argument with the family’s human child, and shoots it with a rifle.  The villagers hunt down the entire dog species, kill them, and eat them.  Not a story I expect to go over well in dog-loving countries.

The Boy, the Swordfish, the Bleeding Island by Ng Yi-Sheng.  This is a non-fiction piece, but was my favorite part of the magazine.  It discusses a fantasy story, possibly written down in the 1500’s or 1600’s:

14th-century Singapore is attacked by a plague of swordfish, who are coming onto land and spearing thousands of residents to death.  A boy suggests that instead of defending the shoreline with an army of warriors, they place a wall of banana stems there.  The swordfish bills stick in the stems, and the fish are easily clubbed to death.  The Maharaja decides that the boy is too smart and must be killed.

In the 1960’s, a Singaporean author tried to pass off a version of this story as part of a true historical archive, then went on to write alternate history novels where medieval Singapore conquers and colonizes the entire planet.

See It Coming by Jennifer Champion.  Normally I would write a story description here, but I couldn’t make heads or tails of this.

Her Majesty’s Lamborghini and the Girl with the Fish Tank by JY Yang.  A little girl can bring inanimate objects to life.

Brother to Space, Sister to Time.  This story gives so much that you have to piece together, but so little to make you want to continue reading.