Side Quest: from Malak to After the Apocalypse 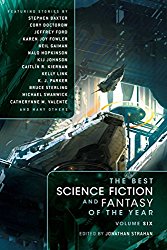 The Best Science Fiction and Fantasy of the Year, Volume Six

I didn’t have good luck with the first nine stories from this collection, but I’m sure that was just nine anomalies in a row.  Here are the next ten:

Malak by Peter Watts.  A drone develops (or gets programmed with, I can’t remember) a conscience, and decides to nuke its own HQ, because the humans only override its abort decisions, never its attack decisions.

Old Habits by Nalo Hopkinson.  A shopping mall contains a community of ghosts of people who died there.  The story raises the question of what will happen to the ghosts if they try to leave the mall, but never answers it.

A Small Price to Pay for Birdsong by KJ Parker.  A music professor visits his student, a composer who is in prison, condemned to death.  I didn’t spot any SF/F element.

Valley of the Girls by Kelly Link.  A story with some interesting social ideas, but it’s marred by time jumps and by trying too hard to be mysterious with terminology early on.

The Dala Horse by Michael Swanwick.  I read this story earlier in my side questing.

The Corpse Painter’s Masterpiece by M Rickert.  Another story without any SF/F, but it did have jumps in time and POV character, even within the same sentence.

The Paper Menagerie by Ken Liu.  I discussed this story in one of my magazine reviews.  Short version:  a touching story, but the fantasy element is either minimal or nonexistent, depending on how you interpret things.

After the Apocalypse by Maureen McHugh.  I read this story earlier in my side questing.

Suggested use for this collection:  convincing writing hobbyists that they must be the greatest authors ever to walk the face of the Earth.

← Side Quest, attempt #2
Side Quest: from Underbridge to Goodnight Moons →
Join 5,220 other subscribers
Follow Planetary Defense Command on WordPress.com