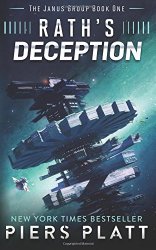 Last week, I posted my nomination for the Planetary Awards in the short story category. In that post, I mentioned that I found a couple of surprise gems in my December novel-reading binge. The best of these was Rath’s Deception

I wasn’t familiar with the author, and the polished writing and page-turning quality of the book made me suspect that Piers Platt was the pen name of a famous author from another fiction genre. I was wrong about that, but it turns out that he did write a bestselling non-fiction book about his experiences as a soldier in Iraq, Combat and Other Shenanigans

The story follows Rath, an inner-city kid, as he joins a mysterious assassins’ guild, goes through training, and carries out several contract killings. The guild has avoided the interstellar police for hundreds of years, partially through the standard tactic of killing anyone who tries to talk, and partially through the use of some nifty sci-fi gadgets. I won’t say too much about the plot, as I hope you’ll read the book yourself, but I thought there were a couple of areas which could have been improved, so I’ll discuss them below:

The premise of the book is that the guild collects money for the contract killings, and if the assassin survives 50 missions, they get 50% of that money as a retirement payout, but if they die, the guild keeps the money. As soon as I heard this, my mind jumped to the only logical conclusion. If the average contract pays $x, that means the guild is motivated to kill someone for 0.5 times $x. After the 50 contracts, the guild has a 25 times $x incentive to kill the assassin. Is there any doubt what happens next? The story premise would have worked better if the guild had maintained a fake bank or forged documents of escrow accounts for the assassins.

Some chapters were from the viewpoint of other characters – a police detective and an investigative journalist. I thought these chapters worked really well when they showed the aftermath of other assassins’ hits, giving just a glimpse into their nature, but when the investigators were following Rath’s actions, I found it redundant as I already knew exactly what he had done, and why.

The detective had a good revenge motive for trying to hunt down the guild, as well as a lack of living relatives, so his behavior seemed natural. The journalist, on the other hand, had no motive beyond “the story” and also had a wife and baby at home. He apparently never considered the danger of trying to expose an assassins’ guild which had avoided law enforcement for centuries — this was the first thought that popped into my head. Even a threat against his family from the guild didn’t seem to take top priority.

Despite the above behavior issues, I found myself wrapped up in the characters’ situations, and I also enjoyed the sci-fi technologies integrated into the plot. I plan to read the sequels, Rath’s Gambit

What about the other self-published novels I read in preparation for the Planetary Awards? Before finding Rath’s Deception, I read a long string of below-average books. I almost abandoned them individually, and even considered giving up on my overall reading goal. Some of those books may get blog posts here as I attempt to warn authors and aspiring authors about specific writing flaws.

I’ll give an honorable mention to Renegade

by Joel Shepherd. The novel leads off with an unnecessary infodump (an up-front listing of the history of humanity in space and various wars with aliens) but once you make it through that, there’s an enjoyable story with plenty of intrigue and action.

Some time in the next couple of weeks, I’ll post my nomination for best traditionally-published novel. Leave feedback in the comments section about the novels I’ve mentioned above, or your own choices for best 2015 novels.