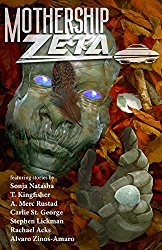 The human brain isn’t perfect.  For example, most adults don’t remember the moment of their birth.  I’m different.  I remember the day I hatched, a fully grown human, from a pod on the mothership.

I can’t tell you what the mothership told me that day, because the language she used has no written or spoken form.  She communicated directly with my neural pathways, filling my head with irrational fears, burning desires, and bizarre compulsions.

Before setting me on the planet, she gave me a mission:  ruthlessly criticize and tear apart its science fiction.  Young people would lose their desire to explore the stars, and wouldn’t care to design propulsion systems as adults.  They would no longer search the sky for signs of life, or dream up innovative methods for waging war on distant aliens.

But, the mothership made a mistake.  She didn’t have all the information.  A mothership had been here before.  Maybe one of ours, maybe one belonging to another race.  The science fiction the mothership feared was gone.  Earth’s stories keep people’s heads pointed not at the heavens, but at their feet, or sometimes their genitals.

My task has been accomplished.  I should just walk away.  But, that’s not how compulsions work.  I’m here to ruin the planet’s science fiction, and that’s what I’ll do, even if it gives humans the will and the means to fight, and destroys the race that gave birth to me.

That Time with Bob and the Unicorn by T. Kingfisher.  A humorous story, that may not be exactly what you’re expecting.

The Android’s Prehistoric Menagerie by A. Merc Rustad.  Some space debris falls to Earth, wiping out humans but somehow also de-extincting dinosaurs and various ice-age mammals.  A robot raises some baby dinosaurs.  Also, for no reason, there is a phoenix.

The Elixir of the Not-So-Disgusting Death Smell by Carlie St. George.  A scientist and her zombie boyfriend … oh, I see you’ve moved on to the next story.

A Bird, a Broad, and a Mess of Kyodatsu by Stephen Lickman.  A tengu (mythical crow-man) in American-occupied Japan has a new profession as a PI.  To me, adding Japanese mythology and changing the American technology to steampunk (or was it dieselpunk?  I’ve forgotten.) was too much change in the space of a short story.  The ending was also inconclusive, so perhaps this was meant as an opening chapter for a novel.

Fire in the Belly by Rachael Acks.  A stowaway is kicked off a starship, does some pickpocketing, and walks into the desert, which gives her magical powers.  This story also had an inconclusive ending, but I enjoyed the character’s tough attitude.

Forty-One Bad Breakups and One Redemptive Reunion by Alvaro Zinos-Amaro.  A man, occasionally sex-changing into a woman, jumps from alternate reality to alternate reality, looking for true love.

I hope you enjoyed today’s (totally 100% fictional, really) intro story.  It was my take on the word mothership, not an individual criticism of the magazine, which is currently ranked within the top third of the 48 I’ve read so far.

← 21st-Century SFF Publishers
Side Quest: from The Copenhagen Interpretation to a Response from EST17 →
Follow Planetary Defense Command on WordPress.com