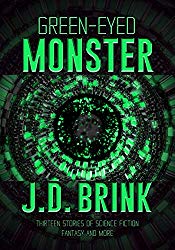 I’ve finally gotten a break in my road travel schedule (good for my health, but bad for my career prospects, since my driving is to job interviews these days), so I’m giving the audiobooks a rest and doing some good old-fashioned reading with my eyeballs.  Well, not all that old-fashioned, since I’m using a kindle.

Green-Eyed Monster by JD Brink was my most recent read.  It’s a collection of stories that vary in length and genre, but are of consistent high quality.  I wouldn’t give any of them less than four stars, and I’d give more of them fives than fours.  Not a single story in the collection bored me or made me want to skip ahead.  That’s rare for me, especially considering the anthology has thirteen stories.

Green-Eyed Monster.  A man is shrunk down to microscopic size to perform a medical procedure on his boss, like in Fantastic Voyage (possibly the first sci-fi film I ever watched).  In Green-Eyed Monster, however, the shrunken man suspects his boss has been sleeping with his wife, so he has his own agenda.

The Thorne Legacy.  I have previously reviewed this story.

Tuesday Afternoon Mayhem.  This is the first few chapters of the novel Deus ex Machina, part of a superhero series that begins with Masks.  Although it’s an excerpt, it tells a complete story and doesn’t require any previous knowledge.  I’m normally not a fan of superheroes, but I may have to start reading this series.

The Dragon’s Tongue.  I think this is part of the fantasy novel Tarnish, which has some interludes where characters tell stories to other characters.  This is one of the stories.  The character telling a story within a story somehow gives it a fairy tale feel, but it’s still good sword and sorcery.

The Lion’s Share.  This was in an issue of Cirsova.  OK, I didn’t post too many details when I was writing that post, so I guess you’ll need to pick up this anthology or the Cirsova issue and check out the space pirates for yourself.

Hunted.  After the collapse of the space shogunate, two very different clans clash.

The Siren of Songwind Wood.  Another Tarnish story.  I didn’t notice the different storytelling style as much, so either I got used to it, or it was less pronounced here.

Littermates.  A follow-on story to Lion’s Share, which is also in Cirsova magazine, spread across a couple of issues.  The space pirates get into a fight at a pirate port, then try to smuggle some stolen artwork.

Platypus.  A dystopian story featuring government control over the individual.

Snake Eyes.  A hit man goes after the luckiest man in the world.

← Reading on the Road
Outside the Lines: The Recruit →
Join 5,220 other subscribers
Follow Planetary Defense Command on WordPress.com