Murder on the Cosmic Express 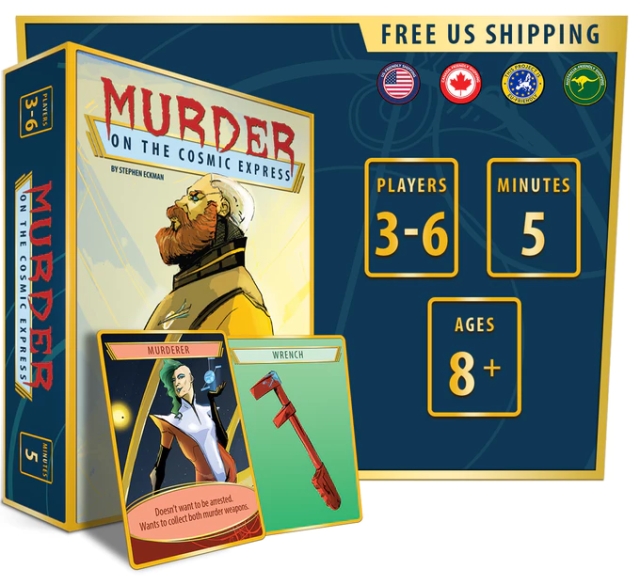 Once again, I’m under time pressure due to my work situation, but I wanted to throw out a quick post before the Murder on the Cosmic Express kickstarter ends (in just a couple of days).  Disclaimer:  I am related to the game’s designer.

Here’s a blurb describing the game:

You are the Captain aboard the Interplanetary Cosmic Express Cruise Line when it is discovered that the President of the Cosmic Express Lines has been murdered. The Captain must examine the evidence, interrogate the prime suspects, and figure out who the Murderer is!

Murder on the Cosmic Express is a deduction and social deduction game for 3-9 players that takes less than 5 minutes to play.

For those of you who are sensitive about such things, I’ll mention that the game’s publisher (not my relative) is under attack by the social justice crowd, as its owner has been accused of telling a dirty joke in a bar, or possibly propositioning a woman in a bar — I’ve forgotten the exact accusation.  Neither myself nor my relative were present, but I’ve heard that others who were with the guy while he was in the bar observed no such behavior, but are afraid to say so publicly.  I’ve also heard that the woman making the accusation immediately launched a patreon so people could give her money to … somehow make a statement against that awful guy.  Mostly, I’m now angry that I just wrote more about that than about the game.

So, watch the video, and if you like it, maybe you’ll be interested in the kickstarter.  Feel free to leave me comments about board games, card games, or murders taking place on spaceships, but not about conversations taking place in bars.

← Hack Those Stories!
Vote for the best stories of 2018 →
Follow Planetary Defense Command on WordPress.com