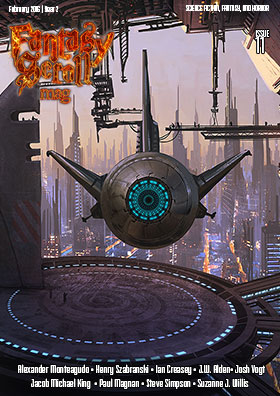 My doorbell chimed, and I opened my front door to find an enormous, bright-red dragon blocking my entire field of view.

The dragon puffed smoke from its nostrils and reached out with a talon to poke me in the chest.  “So, dragonslayer, the tables have turned.  How does it feel when an enemy comes to your home to attack you and carry away your treasure?”

“Oh, that’s what this is about.”  I cracked my knuckles.  “Give me some time to put on my armor.”

“I will grant your final request.”

“It might take a while.  I’ve got a breastplate and a helmet … and gauntlets and greaves … and … um, a codpiece …”

“How much time shall you require?”

So, now you know why I always enter and exit my house via the back door, and why my homeowners’ association is suing me.

Sundark and Winterling by Suzanne Willis.  A lot of buildup to an inconclusive fae vs fae battle.

Red Cup by Paul Magnan.  A flower that can walk is hated by all the other flowers, who try to kill it.

The Water Moon by Steve Simpson.  Some people on Earth have the ability to make avatar-drone copies of themselves that can go around and do stuff, but if they die, their consciousness just snaps back to the sleeping main body.  Some other people are human-form avatar-drones of moon-people for their entire lives, and when they die, their consciousness returns to their moon-person body on the moon.  The protagonist is in both categories, and when his avatar-of-an-avatar dies on Earth, he somehow re-spawns in a moon-person body on Earth.

Battle Lines by JW Alden.  Two enemies are stuck on a derelict spaceship.  A hatch has closed between them so they can’t get at each other, but they can talk over the ship’s comm system.  They’ve kind of become friends, but they plan to fight again if a repair crew arrives, restoring power and allowing the hatch to open.  This is actually a really neat situation, but the story is confusing (intentionally, I think) and almost over by the time you understand who the conversing people are.

Talking with Honored Guests by Alexander Monteagudo.  An African villager is supposed to mediate a dispute, but nothing really happens.

How I Lost Eleven Stone and Found Love by Ian Creasey.  A formerly-obese man keeps his weight under control by using his pet fat-sucking alien.  Then, he gets an anorexic girlfriend whose own fat-sucking alien starved to death.

The Great Excuse by Jacob King.  Homeless people, after joining a cult, can see Lovecraftian horrors.

The Velna Valsis by Henry Szabranski.  A woman, who is wheelchair-bound and in pain, agrees to an evil ritual.

Have You Seen Me? by Josh Vogt.  A woman, who had been abducted as a little girl and lived a happy life with a faceless white sasquatch and all the other missing children until she was found and rescued, abducts a little girl in the hope of finding her way back to that life.

Fantasy Scroll Magazine has ceased operations, but their issues are up on the website for free viewing, at least for now.

I didn’t enjoy this issue as much as the previous issue of Fantasy Scroll that I read.  In fact, none of its stories even made it to three stars.  For this reason, I’m officially dropping Fantasy Scroll from the magazine quest, and will not be reading a third issue.  The field of contenders continues to narrow….