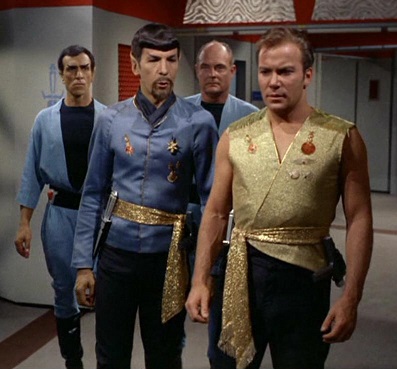 You are witnessing a first here at Planetary Defense Command.  Although I frequently blog about short stories and novels, and every once in a while about a film, this will be my first post about television.  To demonstrate how irrelevant I am in modern America, I’ve chosen to write about two episodes of a television show which aired in 1967.  I didn’t see Star Trek during its original airing, but I remember that when I watched the re-runs, “color TV” was still an important distinction.  The two episodes I’ll discuss here left a lasting impact, sticking in my memory through the decades.

The first episode is called “Mirror, Mirror” (I had to look this up).  Several members of the crew, including Captain Kirk, are transported to a parallel universe, where the Enterprise is populated by “evil” twins of the regular crew.  The Enterprise is on a mission to extort natural resources from a lower-tech planet, and the ship’s officers seek promotion by killing the officers above them.  Yes, this is the episode where Spock has a goatee, and in this sexy universe, it’s perfectly natural for Kirk to share his bedroom with a female member of the crew.

As a child, I saw this as “good universe” and “evil universe”, but today, I’m not 100% sure.  What if there were an extinction-level threat, and the races of the “evil” federation had to militarize to save themselves?  I also thought the “evil” fleet would doom itself by killing its own officers.  Now, I think about Earth’s history, and wonder how many battles have been lost, ships sunk, companies bankrupted, or entire societies destroyed because the leaders at the top were simply incompetent and had no business being in charge.

I enjoyed a number of aspects of Spock’s evil twin in this episode.  It blew my mind that “evil” Spock wasn’t really evil, he was actually almost identical to regular Spock.  He was still operating in the most logical manner, but under a different set of rules.  He never tried to assassinate Kirk, preferring the second-in-command role (which apparently drew fewer assassination attempts), and the resulting two-man team was unbeatable.  I have a vivid memory of Spock threatening to send his agents after someone, and stating, in an ominous tone, that “some of them are Vulcans.”

For me, Kirk still managed to steal the show at the end, with an action I’d place among the most heroic I’ve seen in fiction.  The “good” crew members have figured a way back to their own universe, but it’s time-sensitive, and they have to go, now!  Kirk doesn’t just run home, yelling “so long, awful universe” over his shoulder.  He stops and delivers a rapid-fire speech to Spock, telling him that no empire can last forever, and that there are other ways to organize a society.  Spock promises to consider his words.  Kirk risked being trapped in the “evil” universe forever, trying to bring a better life to the people there.  Mighty heroic, in my book.

I’ll write more briefly about my other chosen episode, “Space Seed”.  This is the episode with Khan.  Fans liked this episode so much that it got its own spin-off movie, “Wrath of Khan.”

The crew of the Enterprise find Khan and his people in some kind of stasis pods aboard a derelict ship.  It turns out the people in the pods were genetically-engineered supermen (and women) who tried to conquer Earth.  They apparently were defeated at some point, and escaped or were exiled on the ship.  There have been some Khan-related books, such as The Eugenics Wars and To Reign in Hell, but I haven’t read any of them yet.

Khan and his people attempt to seize the Enterprise and go on another round of conquest, but are defeated by Kirk and crew in the end.  One of the most interesting elements of the episode is that a female member of the enterprise crew falls under Khan’s spell, and ultimately decides to go with him and the other supermen into exile following their defeat.

The episode made me think of practical questions, such as “how were the supermen defeated on Earth?”, as well as philosophical questions:  Should the superior rule over the inferior?  Does that change if the superiors are not just superior in their own minds, but under some objective standard?  What if people disagree on the standard for superior?  Bonus thinking:  try asking these questions in other contexts, from the European colonialism of the past, to the scary AIs of the far future.

The more recent versions of Star Trek haven’t made quite the same impression on me, possibly because I saw them as an adult.  For me, the most memorable episodes of “The Next Generation” series involve the Borg, a truly terrifying menace.  The “Voyager” series had an interesting premise, but I saw very few episodes, in scrambled order.  (I often didn’t get the full experience of a TV series, especially when I was living or frequently traveling overseas.)  I never watched “Deep Space Nine” because friends told me it was basically a soap opera, but maybe I should have checked for myself.  I only caught a couple of episodes of “Enterprise”, and none of the more recent show/shows.

OK, your turn to chime in by leaving me comments below.  What do you think of the episodes I chose?  Are there other episodes you would choose instead?  Is there some other TV show that still makes you think, many years after it aired?