Sadly, this won’t be a story about a dangerous gambling experience in a mafia-owned casino.  It’s just another blog post about my short stories being rejected by magazines and anthologies.

I received my twenty-first rejection last month.  I know, some of you authors are laughing and saying “I got twenty-one rejections last week”.  My progress has been slow partially because I’ve submitted to a lot of anthologies, which have long submissions windows and long decision periods.  More importantly, I only have two stories out there on the rejection circuit.

Two stories is a pathetic output level, but keep in mind that I’m not a professional author, and at this point, I’m not even a hobbyist author.  It’s more like my hobby developed a hobby of its own.

I am considering devoting more time to hobbies in the future, though, as I crunched some numbers at work, and derived the following equation:  [ Reward = Effort * 0 ].  Broadening my analysis, I determined the true form of the equation is [ Reward = (Effort * 0) + (Schmooze * 100) ], but my schmooze value was preset to negative ninety-five, and I can’t seem to change the factory defaults.

On the positive side, I have completed a third story, but I’m not submitting it anywhere yet.  It’s a little more mainstream than my other work, so I’m hoping it has a better chance, and I’m waiting for more beta reader feedback to see if I want to change anything.

My first story has received ten rejections (and it’s submitted to another magazine now).  Two of its rejections contained feedback.  The first feedback just said something similar to “I like the worldbuilding”.  At first, I thought this was useless, because it doesn’t tell me what I need to fix.  Eventually, I realized it was useful.

My writing is typically concise (OK, I blather on endlessly here on the blog, but my fiction writing is concise, and my scientific writing was practically laconic, until people forced me to re-write it), but thanks to that comment, I don’t feel that I need to include boatloads of descriptive detail.  This rejection was also a higher-tier rejection, meaning something along the lines of “your writing is professional-level, and I’m sure another magazine will take this”.  Unfortunately, that piece of info was sort of written in code, and I didn’t understand it until I later read an interview of the editor.

My second rejection with comments gave much more detail (and only one day after I submitted!).  This was from the editor of the Unidentified Funny Objects anthology series.  I’m kicking myself about one piece of feedback, because I added a new scene for this submission to explicitly amp up the humor, and the editor said the story would be greatly improved if I axed that scene.  Kick kick!

The editor also said he liked the writing and the ideas in the story, but that I was trying to accomplish three separate things with the story, and he didn’t know which one was the main theme.  Again, I think without that additional scene, this would have been more clear.  Kick kick!  Still, I was really glad to see that the editor read the entire story, and “got” what I was doing.

I was also invited to submit a second story in the same submission window, which I did, but my other story (in my opinion, not as strong as my first) just got a form rejection.  If any of you guys have an idea for a humorous story, I’d recommend giving Unidentified Funny Objects a shot.

My second story has received a total of eleven rejections, all standard form emails.  I have it submitted to another anthology, and if it comes back from there with a rejection, I may bury it in a shallow grave.

I also pulled the story from consideration at one other anthology, because the editor needed to find a new publisher and had no idea on the timeframe.  Get this, the anthology was dropped by the publisher for being too anti-capitalist!  There have been surveys showing that publishing is pretty much the most liberal profession in the USA, and the original publisher was in Portland, Oregon, one of the most liberal cities in the USA.  What the heck was in that anthology?  I knew the editor had a bit of an anti-capitalist bent, so I thought my story might slide in because the main character likes to bitch about his (or her — it’s first person and I never specified) boss, and there was another aspect of my story which fit with the anthology’s theme.

That’s the past, what about the future?  My first concept was to write stories of different types, to see if I had a hidden talent (a really, really well-hidden talent) with a particular story type.  I made a grid where one side is the genre, and one side is the tone.  I’m not sure if I chose the best attributes — let me know if you think of better ones.  Here’s my progress so far:

I also have several ideas for horror stories, but I don’t plan to write them.  I’m not really happy that my brain came up with them to begin with, and I don’t think I want to put them in someone else’s brain.

You might wonder why I have multiple partially-completed projects.  As I mentioned earlier, I can be concise.  So, I’ll often need to put a “completed” story aside, and think of a new scene or character to beef up the wordcount.

I’m not sure whether I’ll stick with my full nine-story plan.  I’ve been unsuccessful with submissions and dissatisfied with most of the magazines I’m reading.  That combination tells me the magazines and my stories probably aren’t for the same readers.  What else can I do to get eyeballs on my stories?  (Not literally, I already said no horror).

I noticed that I have a few sets of stories that fit together with common themes, so I’m considering putting two or three stories in a collection, and self-publishing it on Amazon for 99 cents.  Ninety-nine cents, the lowest price allowed at Amazon, is a weird place.  For that price, some authors sell individual short stories, others sell collections of a dozen or more short stories, others sell novels, and some (who I assume have just given up on writing forever) sell box sets of a dozen or more novels.

For those of you who know even less than I do about Amazon’s author reimbursement, any price below $2.99 gives the author 30% (maybe less some sort of electronic delivery fee) while prices $2.99 and above give the author 70% (again, maybe less some small fee).  I don’t have a problem only getting 25 cents per collection, but I’m not sure I can get over the idea that I do all the work of writing the story, harassing my beta readers to read it, editing it, formatting it, designing its cover, and pushing customers to Amazon, but Amazon takes 70% or more, essentially just for processing a 99-cent credit card transaction.

Now, if Amazon would put my collection in front of huge numbers of people I don’t know, then I’d say “heck yeah, you earned your 70%”, but in reality-land, we all know how this is going to go.  A dozen (or if I’m really lucky, two dozen) of you, my loyal readers, will check out my stories.  A random aunt or cousin might pick up a copy.  Word on the street isn’t consistent, but says that you need either fifteen or fifty reviews of your work before Amazon will start showing it to new customers, and we all know that only a small percentage of readers leave reviews.

It seems I’ve defined my choices as no readers with the magazines, or a handful of readers with Amazon.  Sounds like I need a Plan C.  Any suggestions?

Or, perhaps I should sit in the lotus position, meditate, and reflect on this: 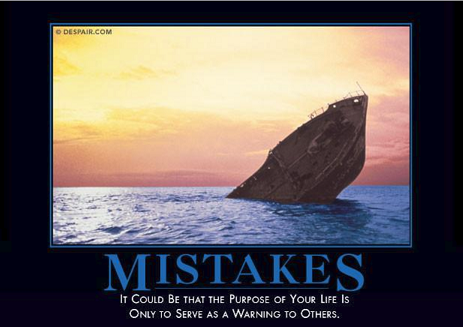 Despair.com really does have something for every occasion.