For Steam and Country 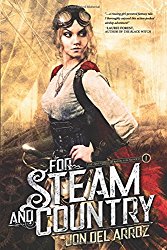 For Steam and Country

Fellow blogger Jon Del Arroz recently released his first steampunk novel, For Steam and Country.  I haven’t read it yet, so this post won’t be a review.  (I will point out that there must be some humor in it, as one of the characters is named Baron Von Monocle.)

I’ve only had a bit of exposure to steampunk, so I’ll describe my experiences here, and I hope some of you will leave comments with your impressions of the sub-genre.  Most of the steampunk I’ve read has been part of my magazine quest.  I haven’t taken the time to go back and check the average rating I gave these stories, but my guess is that it’s not high.  Still, most of what I’ve found in the magazines lately hasn’t been that good, so I shouldn’t hold that against the sub-genre.  I also read the novel Leviathan, which is kind of steampunk/dieselpunk vs biopunk, and it was pretty good.  I plan to review it in the future.

Steampunk authors, in general, seem fascinated with two topics that interest me very little:  characters’ clothing and the manners and customs of Victorian-era Britain.  Again, my annoyance may be at certain authors, rather than the sub-genre itself.  I recently rated His Majesty’s Dragon five stars, and it contains elements of what HP calls “mannerpunk” (my brain keeps trying to file this term under Mannheim Steamroller).

By the way, what’s up with all the steampunk zeppelins?  Are they actually steam-powered?  Shouldn’t the diesel-punks be beating up the steam-punks for stealing their stuff?

Anyway, for those of us without much steampunk background who want to give it a shot, where should we start?  HP has given us his top five steampunk tales, and Jon Del Arroz has provided his five favorites.

I noticed that Jon’s list includes an anthology, Steampunk’d.  I’m planning to do an anthology quest after I finish my magazine quest, so I think I’ll throw a steampunk collection in.  I notice that Terra Mechanica has a story by Jay Barnson, and I liked his story in StoryHack issue zero, so I may choose that over Steampunk’d.  Amazon’s algorithms are also suggesting Steel & Bone and Mechanized Masterpieces to me.

That’s all I have to say about steampunk tonight, how about you?