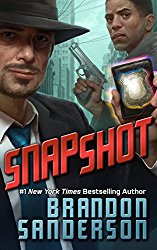 Snapshot is a novella-length story, roughly two and a half hours of audiobook, which I’m estimating would make it about 80 pages long if it were offered as a paperback (ebook and audio are the only current options).  Although Brandon Sanderson has published many books through the big houses, he chose to self-publish this title.

The premise is that the two main characters are the only real people in an entire city.  They are detectives, sent in to an exact re-creation of the real city from x days ago, to gather evidence and solve crimes.  At first, I thought this was a computer simulation, but then I realized why the author didn’t go that route:  a computer capable of re-creating the city could just gather the evidence itself.  So, the replica city is created by some unspecified paranormal being.  You just have to accept that and enjoy the story.

I enjoyed the two characters’ interactions and their attitudes towards their jobs.  I also enjoyed two major plot twists near the end of the book.  I think those twists would make good discussion material for a book club, or good study material for an aspiring author, with the topic being the appropriate amount of foreshadowing.

I’d like to say a few things on the topic here, but it’s hard to do without including spoilers.  So, I’ll try to be as vague as I can below, but if you’re thinking of reading Snapshot any time soon, you might want to skip the rest of my mini-review.

I’ll admit I was blindsided by the first plot twist.  There were a couple of clues pointing in its direction, but I dismissed those things nagging at the back of my mind, assuming I had attributed some lines of dialogue to the wrong character.

The second plot twist also caught me a bit off guard, even though it was heavily foreshadowed earlier in the book.  I’d probably say it was too heavily foreshadowed.  So, how did it catch me off guard?  I was so wrapped up in the plotline of the first twist that I had stopped thinking about the foreshadowing of the second twist, either forgetting about it or assuming it had been a red herring.

If you’ve read this story, leave me a comment and let me know how the twists and the foreshadowing worked for you.