I don’t have time to write up a magazine review (or a silly intro story) this week, but I thought I’d mention some news concerning two of the magazines which are competing for the top spot in my magazine quest.

Red Sun Magazine’s third issue is out.  I haven’t read it yet, but it looks like it’s leaning towards horror: 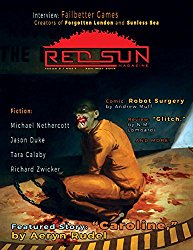 Cirsova magazine’s fifth issue is out.  I haven’t read this one yet, either.  Most of the stories are set in Eldritch Earth, a setting established by Misha Burnett in his novelette “A Hill of Stars”, which I covered briefly in my review of Cirsova’s first issue.

I’ll try to get back to the magazine quest next week.  I have nine more magazines to review before moving on to round two, and the list will get longer if I decide to add fantasy-only magazines (mags which exclude science fiction).