I haven’t made my choice for best short story yet, so I thought I’d share my top contenders with you. I read around 40 issues of SFF magazines in 2016, as well as several anthologies and a couple dozen stories off the web.

I haven’t reviewed issue 125 of Space and Time Magazine yet, but I will as I finish my magazine quest.  My favorite story was “Jack Liberty’s Son” by DJ Cockburn.  It inspired me to purchase the author’s anthology Steel in the Morning, which I also plan to review.

I’ve read the first 3 issues of Cirsova magazine, and I’m reading issue 4 this week.  I’ve posted a review of issue 1.   (Cirsova is currently running a kickstarter to fund issues 5 and 6.)  It’s a tight race, but I’m leaning toward “A Hill of Stars” by fellow blogger Misha Burnett as my favorite Cirsova story.

Issue 1 of Red Sun Magazine only had four short stories, and I’m considering two of them for best short story of the year.  That tells you how much I loved this issue.  I felt like I was in the shoes of a character as I read “Taste the New Drug” by Rhoads Brazos, but one scene with sexual content, which I don’t enjoy in my SFF, makes me reluctant to choose the story.  “Paper Cut” by fellow blogger Aeryn Rudel grows on me the more I think about it.  If he ever decides to expand the story into a novel, I’ll pre-order a copy the day it’s listed.

The September 2016 issue of Perihelion had two stories I’m considering (you can read them free on the web).  I enjoyed the space pirate story “When it Comes Around” by Auston Habershaw, and the artificial intelligence story “Buddy” by Nolan Edrik.  I’ll definitely read more issues of Perihelion in the future. 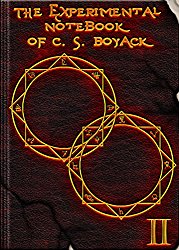 Moving on to anthologies, fellow blogger C.S. Boyack‘s second experimental notebook, which I’ve reviewed, is a natural contender since I chose a story from his first notebook last year.  I haven’t decided on a favorite, although I seemed to enjoy the lighter, sillier stories more than the meatier ones this time around.

I haven’t written my review of Galactic Games yet, but here’s a sneak preview:  it has stories all across the 1-5 star spectrum.  If reprints were eligible for annual awards, then Mike Resnick’s “The Olympian” would be the story to beat.  With that story out of the running, I’m considering “Shooter Ready” by fellow blogger Larry Correia, and “For the Sake of the Game” by fellow blogger Gray Rinehart.

I originally planned to write a longer post with a list of honorable mentions, but I’m running short of time tonight, so I think I’ll stick with the real contenders.  Leave me a comment below, in an attempt to swing my vote.