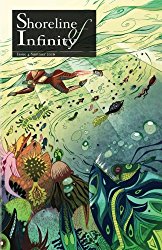 I perform a final check of my shark cage and SCUBA gear as our boat bobs up and down on a Scottish lake. The constable lies on the deck, drooling. I probably shouldn’t have darted him with enough tranquilizer to calm an angry plesiosaur, but he wouldn’t shut up about needing to go back for a bigger boat.

The captain looks over my gear. “You go in the cage … cage goes in the loch … Nessie’s in the loch … our Nessie.” He walks away singing, “fare well and adieu …”.

Well Enough Alone by Holly Schofield. A story about an elderly woman who lost her short-term memory. She makes an interesting character, and has some neat technologies to remind her of things or warn her of danger. Then, while still keeping a light-hearted tone, the story takes a dark turn.  The woman used to be a programmer, and subverts her devices to assist in her suicide.

This story really ticked me off, because I didn’t think its light-hearted tone was appropriate given the dark subject matter, and I also didn’t like the implication that inconvenient old people should just die. My grandmother recently died at the age of 98, and she was senile for many of her last years. I helped care for her, and she was a thousand times more trouble than the character in this story, but we never wanted her to die.

Senseless by Gary Gibson. Political prisoners are blinded, deafened, or crippled, but offered healing if they will inform.

The Stilt-Men of the Lunar Swamps by Andrew Wilson. A steampunk-style story about a trip to the moon.

Model Organisms by Caroline Grebbell. The author tried to pack in as many biological terms as possible, possibly without understanding a few of them. A research organism is the point-of-view character, but nothing occurs during the story.

Note to Self by Michael Stroh. A best-selling author mails a copy of his first novel to his past self, to jump-start his career.

From the Closet by Robert Neilson. An alien or urban-fantasy creature or something goes on a date. That’s it.

Geefourdotalpha by Clive Tern. A girl finds a damaged warbot.  That’s not the start of the story — that’s the story.

The constable and I hang onto the largest piece of the boat’s wreckage and kick towards shore.

The constable turns his head towards me. “Cotton Candy?”

[EDIT] I forgot to mention that Shoreline of Infinity is a Scottish SFF magazine, which is the reason for my JAWS-Nessie crossover intro story.

← I am the 40%
Halloween Cat →
Join 5,220 other followers
Follow Planetary Defense Command on WordPress.com