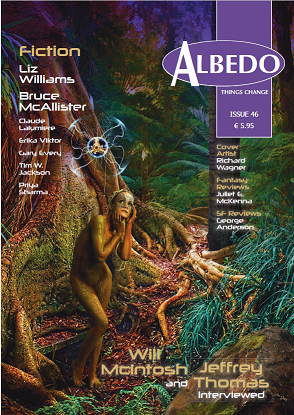 A bowl of cereal in one hand, a jug of milk in the other, I head to the kitchen table. There’s no room to set down my breakfast, because a two-foot-tall man in a three-piece suit is stretched out there, snoring. I use my elbow to shove him off, and he hits the floor with a thud. I pour milk on my cereal and eat.

The little man jumps onto the table. His facial expression and Irish-accented voice are too cheerful for this early in the morning. “You’ve done it! You’ve found my treasure!” I give him a dumb look, and he points at one of the cereal boxes on top of the fridge.

I swallow a mouthful of cereal. “That? I don’t really want it. I bought it by mistake.”

He balls his fists and his face turns red. “By mistak–”

“Cookie Cr– … Men have sailed the seven seas and searched the four corners of the Earth for my treasure.”

His voice gets louder, and his face turns even redder. “Wal-M– … Finding my treasure is a lifetime’s work, and entitles you to three wishes.”

“Calm down before you have a stroke. I’ll give you my three wishes, if it’ll make you happy.”

His fists unclench and the redness leaves his face. “Well, all right then.”

“I can take care of those first two for you right away, but that third one … there are European Union regulations, and …”

Albedo One is a SFF magazine from Ireland. I thought the publication was dead, as the previous issue came out in 2014, but this one popped up just in time for my magazine quest.

I don’t believe any of the authors are Irish, although it’s possible they have Irish heritage, as they are from the UK, USA, Canada, and the Cayman Islands.

Cold Harbour by Liz Williams.  Descriptive writing about a creepy setting made me think I was in for a Stephen King-style story, but ultimately this went nowhere.

The Quantocorticoid Effect by Claude LaLumiere.  Children travel to fantasy worlds, but not just in their minds, as they can share fantasies with other kids, and their bodies disappear during the trips. I was convinced this was another go-nowhere story, but the ending proved me wrong.

Stone Child by Erika Viktor.  An American doctor in Mali makes an interesting main character, but the non-chronological scene order is confusing. I think this would have been a creepy/scary horror tale, but I was too busy being confused to be scared.

I’m imagining myself in a horror movie, startled as a masked killer bursts into the room with an axe. I scratch my chin. “OK, is this the part where you’re mad because you got teased in high school? Or is this the part after the voodoo priest brings you back from the dead? Because, I’m not really sure if I should be calling the police, or trying to run to the church sanctuary … I’m really just confused about where we are in this whole setup.”

Lewis and Clark Meet Bigfoot or Sasquatchagewea by Gary Every.  A sasquatch tails the Lewis and Clark expedition. Authors, please, one title per story in the future.

They Call it Duppy Love by Tim Jackson.  A supernatural/horror tale set in the Caribbean. A talking chicken is mentioned. I’m not kidding, talking chickens are popping up everywhere!

Stealing God by Bruce McAllister.  A horror story set in the Southwest USA, on Indian reservations.

Grave Goods by Priya Sharma.  A child used as a human sacrifice goes on a quest in the afterlife.

Looks like that leprechaun owes me a wish. I wish he’d go jump in a lake.

If you want more Albedo One, there are a few issues for sale on the magazine’s site, or you might want to check out Decade 1, their “best of” collection.

← Fairy Apocalypse
I am the 40% →
Follow Planetary Defense Command on WordPress.com