First, some news: I received a rejection letter for my first short story submission. I was originally going to give this post the pessimistic title of “Rejection #1”, because I’m a ‘glass is 96% empty’ kind of guy, not ‘glass is 4% full’. (According to The Grinder, 96% of stories are rejected at Analog magazine, my target.) It took 87 days to get my rejection, which was a standard form letter.

I chose Analog because they publish mostly (only?) sci-fi, and because I thought Analog’s readers might find the behavior of an AI in my story interesting and/or funny. I’ve reviewed an issue of Analog, so you can read about a few stories that did make the cut.

I have another target in mind for this story, but I can’t fire it off right away because I need to go over the magazine’s formatting peculiarities, and I don’t know when I’ll have time for that. Maybe I’ll take the opportunity to look the story over one more time as well.

If you’re interested in the topic of short story submissions, you might want to check out rejectomancy.com, the blog of author Aeryn Rudel. He has quite a few interesting posts about submissions, rejection letters, etc.. You can also read about one of his stories in my review of Red Sun Magazine.

Several authors I’ve reviewed in the past have things going on this week at Amazon:

Panama, by C.S. Boyack, is free for the next few days at Amazon.

You’re in for a Ride by Nicholas Rossis is just 99 cents. 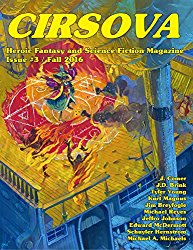 Issue #3 of Cirsova Magazine is now available. I believe there was talk of both regular pirates and space pirates appearing in this issue.

Let me know if you’d like to continue hearing about my rejections on a case-by-case basis, or if you’d just like to know the story’s final destination. Also, feel free to chime in about any of the books/magazines I’ve mentioned above.