Vacation in Maine, Part I

This year, I chose Maine to show my wife another part of the US (I’ve taken her to Texas and Florida to visit family members). I still slipped into foreign-travel thinking occasionally, with odd thoughts like “I wonder who the prime minister of Maine is?” or “I wonder what kind of criminal justice system they have here?”.

We spent a little time in Portland, because we flew to its airport, but mostly adventured around Bar Harbor and a couple of places on the road between the two cities. 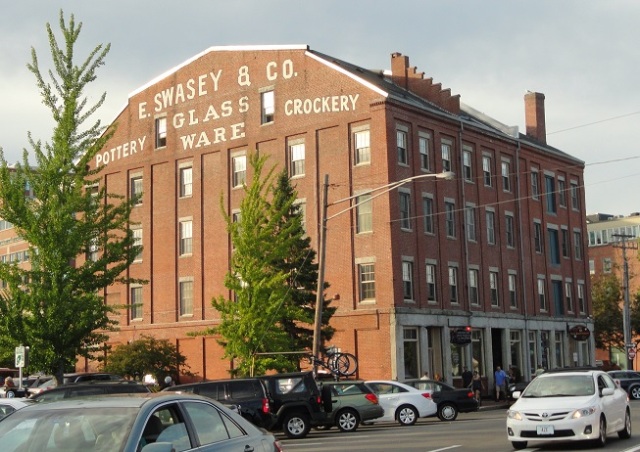 Many old factory buildings have been converted to other uses.

Urban driving in Maine is different from anything I’m used to. Speeds are very low — 25 MPH speed limits are common. This is necessary, as pedestrians have right-of-way at nearly every intersection. Drivers have to stay alert, as their view is obscured by the parked cars blanketing both sides of the street, because residences and businesses have parking ranging from zero to wildly insufficient. Sometimes we felt like we hiked further to get to a restaurant than we did on the hiking trail.

It was impossible to get my wife to step into the street while a car was approaching, however. Apparently, in her home country, motorists get bonus points for running down pedestrians. Even in cities with traffic lights and walk/don’t-walk signs, she crosses the road like a wildebeest crossing a crocodile-filled river. In fact, I was nearly killed walking in her country once. I was in the grass beside the road, facing oncoming traffic to watch for idiot drivers, when I came within inches of being run down FROM BEHIND by a van moving fast enough to have killed me instantly.

That’s not a canoe. This is a canoe.

Another major difference I noticed was that the cities in Maine are DARK at night. Other American cities I’ve lived in are lit so brightly that drivers often forget to turn on their headlights. This bright lighting is based on the theory that criminals are light-averse, so either Maine has fewer criminals, or the light-aversion theory is wrong.

I like narrow-gauge railroads, so we visited the Maine Narrow Gauge Railroad Company & Museum. I was disappointed with the train ride due to its short distance and lack of natural scenery, but I enjoyed the small museum. Most narrow-gauge rail systems were for delivery of specific agricultural or mineral products to markets (for example, I’ve ridden ones built for sugarcane and bananas) but I learned that in Maine, they were full-service railroads carrying passengers and general freight.

We went shopping at the LL Bean store in Freeport. This would be a great place to go during a zombie apocalypse, as it has plenty of rifles, shotguns, bows and arrows, and camping axes. As no zombie apocalypse was scheduled during our vacation, I settled for an Elmer Fudd hat and some things for my wife.

Next, we visited the Maine Maritime Museum. The site was once a shipyard where they built what may have been the largest wooden sailing ship in history, the Wyoming. There are statues showing where the bow and stern would have been, demonstrating how big it was. I’d never really visualized sailing ships on this scale. There are also plenty of exhibits on the various woodworking techniques, like all the wooden pegs that held things together (I’m guessing to avoid rust that would hit metal nails/bolts), an exhibit about the enormous length of rope the ship needed, etc..

Notice how small the people are in the photo.

The museum is next to an active shipyard, which appears to be building a Zumwalt-class destroyer. We saw the workers leave for the day, and it looked just like one of those ‘arsenal of freedom’ reels from World War II, with all the tough-but-tired-looking men carrying their lunchboxes home.

The museum also has great exhibits about the lobster industry. We were running short of time, so I skipped the parts about lobster biology and fishing, but some of the processing industry stuff was fascinating. There was an exhibit about canned lobster, which spread the food’s popularity around the country before fresh lobster transport was possible. There was an exhibit documenting the vast quantities of live lobster now shipped to China, stacked tail-down in cartons like soda bottles. Another exhibit described a new lobster processing technique, placing them in an incredibly high-pressure water chamber that separates meat from exoskeleton and kills bacteria.

I also learned that Maine once had its very own superhero, Lobsterman. A bookstore in Maine has the full comic collection for sale.

Stay tuned for part II of this post, as our intrepid heroes hike, eat lobster, and watch whales.