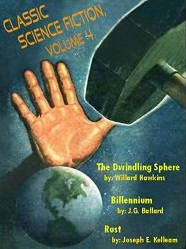 This collection is at least as good as volume 3, probably even better.

WE CAN SPOIL SEVENTY-YEAR-OLD STORIES

The Dwindling Sphere by Willard Hawkins (1940) — A scientist develops a process which converts matter to other elements, with a 95% loss in mass. (The extra mass turns into energy and escapes as cosmic rays.) At first people just use it for trash disposal, but then they learn to refine the conversion process to produce products, and eliminate all other forms of manufacturing. Then they refine the process further to make food, and eliminate agriculture.

At the end of the story, people living on a moon-sized Earth laugh at the notion that they could deplete the planet. I’m tempted to think this was a message about using up the planet’s fossil fuels, but I don’t know if anyone thought about that in 1940.

Billennium by JG Ballard (1962) — Earth’s population is 20 billion, all tightly packed into a few cities, because every inch of farmland is needed. (I’m assuming the national parks are long gone.)

Most people live in cubicles within rooms, and fight mini-wars with their neighbors, trying to slide the walls back an inch. There is no room for chairs — if a friend visits someone’s room, the two people sit side by side on the foot of the bed and talk, switching sides periodically to avoid neck strain. Oh, and the government is about to reduce the standard apartment size to 3 square meters.

The main character gets caught in a people-jam on the street, stuck standing upright for 4 days, afraid the entire time of falling down and being crushed. In another scene, he wants to cross the street to get some food, but getting across doesn’t seem feasible.

I’ve written before that I just laugh at most things labeled “horror”, but this story terrifies me. Maybe I’ll have nightmares about it, or the fact that it could become reality.

Later in the story, the characters mention that the government is inadvertently encouraging population growth, because if a family has 3 or more children, they get priority access to private apartments rather than cubicles.

I’m not sure if the ending is humor or commentary. The characters accidentally bust through a wall and find an empty room. They briefly live like kings, but friends and family members gradually move in, and they each end up with no more space than before.

Rust by Joseph Kelleam (1939) — Some murder-bots live out their last days on Earth, long after wiping out humanity. This would have been a brilliant cyborg story, with human brains (somehow programmed with a compulsion to kill) placed in robot bodies, but it doesn’t work as a robot story. For example, one robot can’t remember how long it has been in a location, although there’s no mention of damage to its memory. More importantly, all the robots are terribly remorseful about the killing they’ve done, and are full of wistful feelings and all kinds of other thoughts nobody would program into a murder-bot.